How was the partnership formed and how did the project come about?

Struan Toyota, a car dealership based in Dundee, contacted DYW about wanting to work with young people. The offer was circulated to local schools and St Paul’s RC Academy was one of the schools who jumped at the opportunity.

St Pauls RC Academy was very keen to take the business up on this offer as it was felt that if S3 Physics pupils could see the relevance of what they were learning in the subject to a real life situation, it would help motivation, future uptake in the subject and attainment. With this in mind, the engagement began leading to the creation of a successful partnership.

Over a period of a few months, Gary and the Physics Department worked together to devise a lesson which would give S3 pupils a balance of background, theory and practical work. Gary then delivered a workshop which covered a number of topics which are taught in Physics and explained how they are used in a contextualised way in the workshops.

In addition to all of this, Gary shared his ‘story’ with the pupils, recalling with them how he has made the position of ‘Master Technician’ in a relatively short space of time, through sheer hard work and having a really positive work ethic and problem solving skills.

Outcome of the project

Both the school and business were very pleased with the pupil’s input and plan to build on this for session 2019/20. The relationship between the two opened further opportunities and one of the pupils in the National 5 physics class went on to do 4 month’s work experience at the garage, for half a day per week. This allowed him to gain further skills in a workplace setting.

This project has taught the S3 Physics class involved a lot about what it takes to become a Master Technician as well as how the curriculum meets those needs. Due to the success of this project it motivated one of the pupils enough to go for work experience. This type of engagement and partnership will lead to higher motivation in class leading to higher attainment. 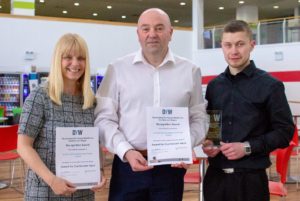