Today was the culmination of the four-week Dark Dundee Local History project with S3 pupils from Harris Academy.

Ms Harris, one of the Principal Teachers of History at Harris is a very big fan of Dark Dundee and felt they would be an interesting guest for some of the history classes. The DYW Dundee & Angus team brought Dark Dundee and the history staff together and through discussion we came up with the S3 Local History Project.

On the 9th November Stewart and Louise spoke to 2 of the S3 history classes. They told the story of the Tay Whale (a story they tell on one of their tours) and illustrated how engaging history and storytelling can be.

Dark Dundee then set the pupils a challenge. The classes were split into 6 groups of 4-6 pupils. Each group was given the title of a local story or legend and asked to prepare a story-telling style presentation. (The Mona Lifeboat Disaster, Jessie Jordan: Nazi Spy, The Cholera Outbreak of 1832, The White Lady of the Coffin Mill, Grissell Jaffray and The Legend of the Nine Maidens.)

This first session was also filmed, so that those classes that Dark Dundee couldn’t get to could still participate. Dark Dundee also provided lists of the best places to find information and made some suggestions on how to make their stories and presentations interesting.

Louise and Stewart returned to the classesafter two weeks, on 22nd November, for some additional in-put. They spent time with each group, giving advice on the stories and presentation styles as well as pointing them in the right direction for finding information.

The pupils also received in-put from drama professionals on their presentation technique.

Dark Dundee and DYW were back in the classroom on 6th December to watch the pupil’s presentations and give some constructive feedback. The pupils work was outstanding and a testament to their learning, the in-put of Dark Dundee and the support they received from their teachers. 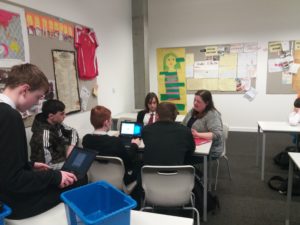 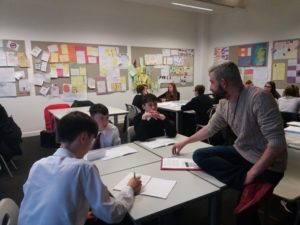 This has been an incredible project that not only brought some fun and local learning to the classroom but improved the pupil’s employability skills and gave them a taster of what they could achieve if they continued studying history.

Taking part in this project gave the pupils the opportunity to develop their independent research skills; they had to find the sources and facts to build their presentation around, they also learned to question the relevancy and accuracy of sources. Working in teams gave the pupils the opportunity to continue developing their collaboration skills. They worked to a brief and within a time limit as well as taking recommendations and feedback from peers and professionals alike. The pupils were also pushed out of their comfort zone by presenting to their peers, without a PowerPoint and in a more conversational style.

The project and the in-put from industry professionals became part of the curriculum, not a shoe-horned extra, and has been a great benefit to the pupils. This is exactly the type of work DYW Dundee & Angus are here to support and encourage. If you would be interested in this or any similar projects, please don’t hesitate to get in touch with the DYW team.