On Wednesday the 15th of January, DYW Dundee & Angus ran a “Finding your Future” event for pupils to hear more about careers in non-traditional gender career roles.  The aim of the event was to encourage young people to view different sectors with a traditional gender bias as desirable career paths at an early stage, before they have made any career decisions.  We invited a variety of different industry professionals along to speak to over 60 S3 pupils from six of the secondary schools in Angus.

To begin the day, we had keynote speech from Heather Earnshaw – Education Officer at Improving Gender Balance Scotland, Education Scotland, who shared some interesting statistics and got the young people thinking about unconscious bias – both theirs and employers.  The pupils then split into gender groups, then into smaller groups to work their way around the different employer’s activities.

Ali, the Education Officer from Dundee Heritage Trust, brought along a few handling artefacts for the young people.  He asked the boys to describe the object in detail, what they thought the object was and how they would use this in an education setting in a museum.  He also spoke about a career in Heritage and different opportunities in the sector.

re.  He did an activity with them around getting them to fill out information for a care package to get them thinking about what social care is.  He then spoke about the increasing number of people requiring care and the reducing number of people choosing it as a profession.

Judith and Craig from NHS Tayside spoke about the different ways to get into different careers with the NHS.  Judith talked about Apprenticeships and Craig spoke about his experiences working for NHS Tayside.  They then carried out an activity with the boys using a baby dummy to discuss manual handling, which they all enjoyed!

Annabel and Erica from LANTRA did a talk on careers within Scotland’s Land based and Aquaculture industries.  They spoke about how to get into those careers through Apprenticeships and each of the pupils then tried their VR goggles, which gave them the options to try a 360-degree view of careers in subjects such as farming and aquaculture.

David from Skills Developments Scotland’s My WOW Live team brought along small robots to talk to the girls about engineering.  He showed them how to code the movements of the robots and had them racing each other by the end!

Louise and Rhiannon from Newton Farm did a workshop around Agritourism in Angus and showed the girls how to make butter.  The pupils all then got a chance to make their own butter.  Louise then discussed the skills they had learned through the activity – communication skills, following instructions and looking at the attitudes of the pupils.  She explained these are qualities employers would be looking for too.

As the pupils visited each employer, the staff discussed their roles and other roles or employment opportunities within their sector, giving the pupils a holistic view of the different careers and sectors in the geographical area.

If you are interested in engaging with local young people, offering a visit to your business or taking part in a similar activity, please don’t hesitate to get in touch with DYW Dundee & Angus – we can support you throughout – contact@dywda.co.uk or 01382 443409. 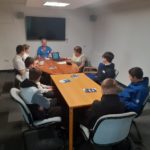 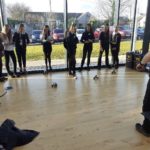 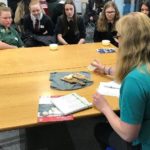