How did the project come about?

The project was led by Morag Oldham (Principal Teacher, Grange Primary) and Nicoll Russell Studios along with a local designer Linsey McIntosh (Lecturer at DJCAD and freelance designer with V&A) who helped create a brief to design a house for a multi-generational family based on their needs and wants. A linear plan was created to support teachers through the project and Nicoll Russell were available to advise and evaluate throughout, while still allowing the children to be imaginative and explore their own creativity.

This was a whole school project involving children from Nursery to P7. To inspire the children and teachers they all visited the V&A Dundee and took part in an architectural workshop. They were then introduced to their ‘clients’ The Shepherds (drama students from Monifieth High). They worked primarily on the technologies, expressive arts and science outcomes with literacy, numeracy and health and wellbeing outcomes being evident throughout.

The children worked collaboratively in groups of 4/5. Nicoll Russell Studios helped design the house using 8 cardboard boxes supplying plans and elevations. They arranged for Bentleys shop fitters to build the house, using their senior apprentice as part of his final submission. They provided resources, helped find funding and provided workshops for the teachers on model making. They acted as mentors for both the teachers and the pupils throughout the project.

Local designers, V&A Dundee, local universities and colleges all acted as experts for the children, visiting the school to offer support. Local firms provided some funding.

How did they win?

Nicoll Russell Studios won this award as the project is innovative in its design, using a whole school approach, whilst linking the school with the local community. Its real-life context provided the learners opportunities to connect directly with the real world which made it exciting and inspiring.

Having the support of Nicoll Russell Studios and using ‘experts’ gave the learners the opportunity to engage with the world of work and consider how the skills they have learned can be transferred to their future.

This type of learning develops critical thinking and problem-solving skills in the learners. This is a design-based learning model that could be adapted to many different contexts.

Who was involved in the project? 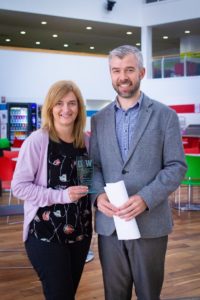 Outcome of the partnership

This project allowed the whole school to take part while enhancing their individual creativity towards the design and have input to the finished product.

Creativity is a very important skill to develop at every age but the whole school has been able to develop this in a fun way while being exposed to industry. A great project to take into primary schools.